Our flight was scheduled during the APEC week – November 17 and we booked it even before there were news about APEC. As the date drew nearer many unfortunate things occurred – a series of flight cancellations due to APEC (3 days before our trip and there was still no advise if we were one of the cancelled flights), a horrific attack and tragedy in Paris in November 2015 which raised the security in European countries, the NAIA 1 “Laglag Bala” threat which is all over the news, and the crazy Manila traffic which is also hard to ignore.

We knew the importance of APEC and we were glad that the Philippines hosted it and we also felt deeply for Paris and prayed for the families who were left behind and peace for the countries involved. It was a mixture of emotions and yet what was also staring us in the face is the concern on what to do with the uncertainty of our trip, the expenses piling up if it were to be cancelled, and the work to be done for either a 2 week trip (as planned), or a 1 week trip (if it were to be cancelled). It was an overwhelming week but during this time, God taught me an important lesson:

Psalm 50:15 Call upon me in the day of trouble, I will deliver you, and you will glorify me.

Sharing with you excerpts from my journal which were written november 17.

2 Days before our trip and still no news if our flight is cancelled. Just when we decided to YOLO, I received a text message from Etihad Airways at 9PM saying that our flight has been cancelled. Really… at night time.

I called up Etihad to check if it was true and asked when the next flight out would be, then the operator said it would be on November 21. Huhu. It would be free to rebook the trip going there, but if we wanted to extend our stay there would be charges. Since we originally booked for November 17-30 on a promo fare, we didn’t want to pay additional just to extend. Our trip then would be cut short to 9 days.

Things I worried about that time:

Visa if they still cover it, Itinerary change, Paid Hotel bookings (on promo), schedules, our safety in Europe (if we do push through).

On our way home, as we were listening to a radio station, it talked about God being bigger than our problems. Wow. what a reminder..

We were awakened to pray to God that He would give us wisdom on deciding the next steps. I mentioned to Ate that our flight has been cancelled and she told us that Travel Insurance usually covers delays and reimburses expenses, so we had a back up plan if ever though it would be a hassle. Yet, it was a blessing to hear it and we thank God for the info my sister knows. Visa is okay valid until December 15, 2015 but only for a 14 day trip so if we extend in Spain, it’s okay as long as we leave before December 15.

But of course we didn’t want to extend as it would be costly. Given the situation, our Spain trip looked so bleak. Jason told me to rest on it and asked me to list down the people I had to call the following day, and also the possible options. We just resolved to accept our fate and thought about how to go about a November 21 trip. We just said, oh well at least we didn’t have to be away so long (14 days). I remember the wedding we attended the other day, “if we go, Praise God, if we don’t go Praise God! Whatever the results may be, praise God forever.” So slept on it we did.

Morning came and we were set to arrange and adjust to a November 21 trip. By faith we didn’t unpack our bags and hoped for the best.

Prior to November 15, our back up plan for the APEC (considering we won’t be cancelled) was to book a nearby hotel at NAIA 1 to avoid the traffic. So we booked it, but it looks like we won’t be even able to use it.  APEC Seminar was good for our country long term but we had to admit that we also were at a loss with our flight. When we booked our ticket, there wasn’t any news yet on APEC. But God had other plans. By God’s grace, we were able to lift up our concerns to Him on knowledge and wisdom on what to do concerning our cancelled flight.

I woke up early eager to put things in order. In the midst of confusion, God impressed in my heart to come to Him. I realized that for the past 2 weeks, I have been so busy meeting clients, preparing for the trip that I forgot the “BLESSER” and GIVER of the trip, my Heavenly Father. Because of this, my joy was stolen and the peace of knowing that God is in control. A lot has been bothering and overwhelming me that when the trip was cancelled it all came to a stop. I took a step back to reevaluate the things I have been so busy about that I forgot about God. He gave me a moment to seek Him in all these turn of events.

As I prayed that morning, I was faced with this verse in my devotional book,

Psalm 50:15 “Call upon me in the day of trouble, I will deliver you and you will glorify Me”. I rested and held on to God’s promise.

I was also taught the following

It was so comforting to know that God is sovereign, that He is on His throne. That moment, by God’s grace, I surrendered to God and submitted to Him that whatever happens, may Jason and I handle it well.

In sincerity and deep conviction, I prayed for these things far more important, more pressing, especially the safety of the delegates. Over breakfast I was already calmer and told Jason how I would make my week useful since the next flight out is November 21. Jason was also composed and surrendered telling me to go as planned – 1. Check with travel insurance, 2. Call Etihad Airways. He also announced our situation to trusted friends and sought for prayers that God will give us wisdom and guidance how to go about it.

We also told some of our family members that our flight has been cancelled so they would be aware.

I then checked with Blue Cross insurance on how to claim – I would just be submitting documents… so check. As I called Etihad, preparing to rebook our trip, they gave us news…

OUR FLIGHT WAS PUSHING THROUGH!

They were already starting to call passengers one by one, I just called a few minutes early. It was finally going to happen. Praise God! But our trip was at a later time. From 5:45PM of November 17 it was pushed back to 12 Midnight of November 18. It’s still okay. We’re glad it’s pushing through!

I realized if God means for it to happen, it will happen no matter what. If God doesn’t mean it to happen it really won’t, we just need to trust in His goodness and His plans.

We had to hurry and immediately double check our packing to go according to plan, which is to sleep at a nearby hotel. We were still able to have lunch with the family and even play with our nephews.

Come 2:30PM we left the house and got caught in a horrendous traffic in EDSA. But Praise God, we arrived at the budget hotel around more or less 6PM.

We had a quiet dinner nearby and slept at 8PM.

Thank you Lord for the strange turn of events, thank you for those who prayed for us and thank you Lord, may we always be aware of your presence and may you be glorified in our trip.

Praise God the hotel allowed us to check out later, at 2PM. So we had more time to rest. We had to be at NAIA 1 3 hours before so at least 9PM. But since we had nothing to do… we already left at 2PM.

We got stuck in traffic since NAIA 1 were holding off entry of cars for at least 45 minutes when a delegate arrives. We got there at around 3:30 even for a 900m distance. But nevertheless we made it to the airport. I was just so glad to be there. What Mimi said about it being a newfound appreciation for our trip was true.

Had it been so easy, I wouldn’t have appreciated it more. If it were too easy and predictable, I wouldn’t have seen God’s hands in it. I was just ecstatic that even if we waited 9 hours at the airport, it didn’t bring my mood down. The airport was practically empty! There were only a handful of passengers at the check in counters since a lot of flights had been cancelled.

Maybe it was because it was APEC week that security is stricter, no laglag bala incidents as well, praise God.

To kill time, we had our lunch at the airport and we sat and waited in Starbucks for more or less 5 hours before we moved to our boarding gate. 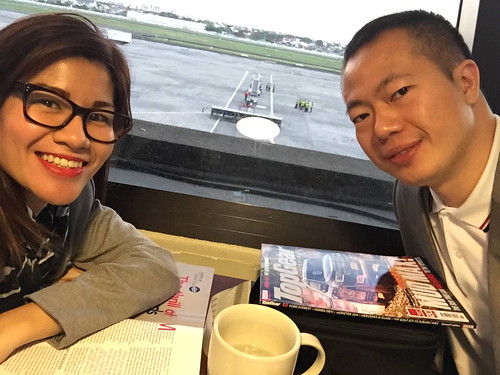 We were seated by a window and praise God, unintentionally and it just so happened that we had a fantastic view of the APEC delegates who were arriving. I was so elated! My heart was big. We had front row seats to this privilege of seeing them land and arrive. We get to travel to Spain in spite of the APEC and we also had a great view of this once in a lifetime experience of Philippines hosting the APEC Summit! Praise God. 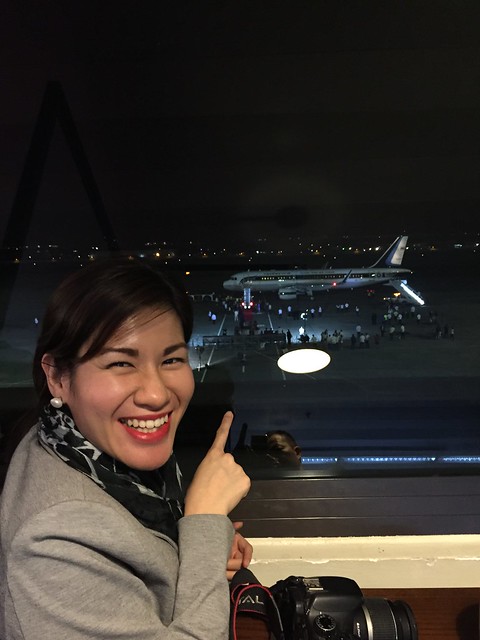 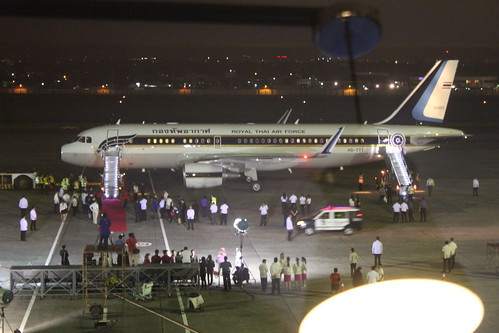 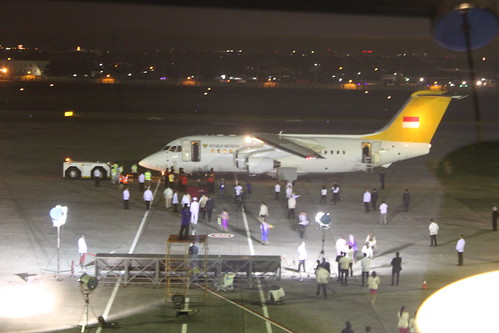 By around 11:30 PM we started to board the plane and I was so thrilled.

Spain and to my foster family in Archivel, here we come! 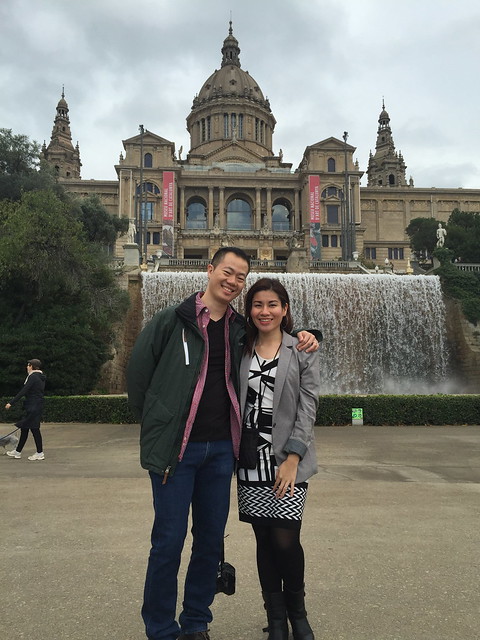 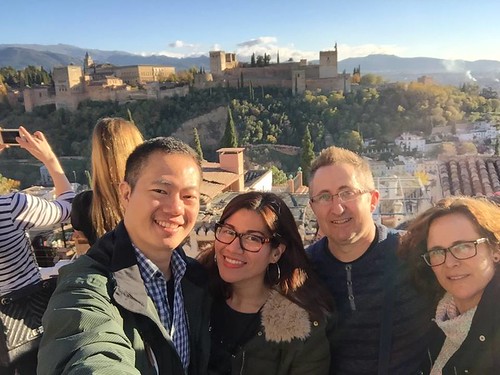 It was such a blessed time in Spain not only because of the experience of seeing my foster family again, or getting to experience it with the love of my life, but more than those it was because of being aware of God’s presence. Truly only He can bring joy, peace, and satisfaction in any place and in any experience.