Last December we had the privilege of experiencing an Asian cruise via Star Cruise Virgo. Our itinerary was Thailand-Cambodia-Vietnam-Hong Kong. This was actually Star Cruise’s first time to do a 48 day cruise that covered the Southern Hemisphere but we just joined their last leg of around 5 days.

It was my first time aboard a cruise and I was excited on what adventure awaits.

Fun fact: The ship was almost as wide as the Titanic, but the latter was bigger in terms of height.

We had to take a plane ride from Manila to Bangkok since we were going to start sailing from there.

As we checked in SuperStar Virgo, we left our luggage to be delivered to our doorstep in maybe an hour or so after we boarded. When we went in and I saw the staircase, for a split second I imagined the romantic encounter of Rose and Jack of Titanic during the Captain’s Night. I excitedly snapped some pictures as though it were my last day, quite ignorant of the fact that we will be walking these same staircase for the next 5 days. -_- But anyway…

We then proceeded to our rooms. We got the Inside Stateroom – no view, but all is well. I was just glad to be there. 🙂 Inside Stateroom can accommodate 3 adults. But it would be pretty cramped. The bathroom was clean. The TV had limited channels but the movies shown were pretty recent like Cinderella, F&F 7, so it was great! We spent most of our time if not in our room to catch a movie, then to laze around getting some sun and sea salt in our hair in the Parthenon Pool. 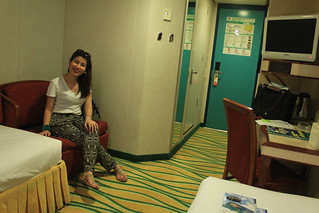 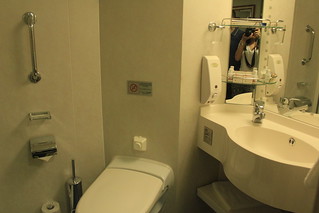 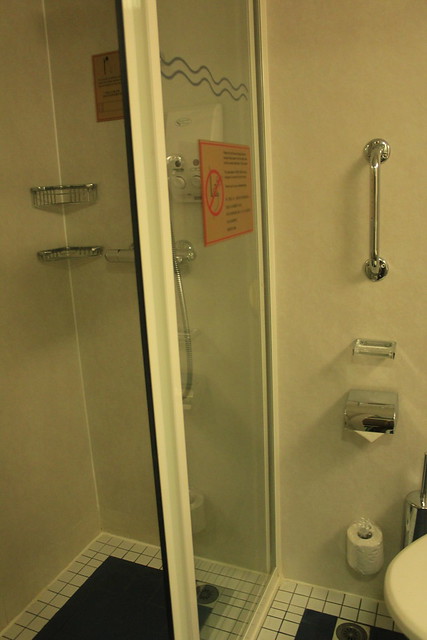 The cruise consisted of 6 meals. YES 6.

It begins with Breakfast – as early as 5AM but in the Taverna. 6AM at the Mediterranean Buffet

Daytime Snack – 10AM (Mediterranean Buffet only)

The Restaurants Included in the Cruise Package

Mediterranean Buffet – It was very flexible in terms of food as they served International cuisine. There was also a section for the Vegetarians. (I loved the roti there!) I also liked the BLEU CHEESE in the regular buffet. I enjoyed it so much that even though I knew that there would still be bleu cheese to be served in the next meal, I wrapped bleu cheese and bread in a tissue to be eaten when I go hungry during the night. (as if…. I don’t really eat during midnight) It’s just that I wanted so bad to preserve the cheese. Ask Jason. What I also liked here was the turkey carving and the LAMB SHAWARMA. 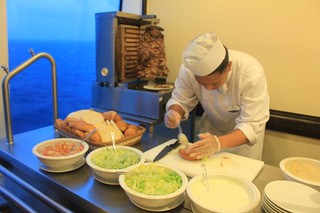 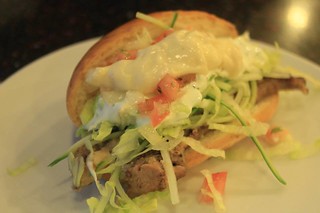 The dessert was also eye candy – literally. It had various choices of fruits, asian and international desserts. Coffee and Tea were unlimited as well. Mediterranean Buffet was also the place where they serve the snacks and supper. This place was very casual so it’s ok to come in shorts and flip flops. 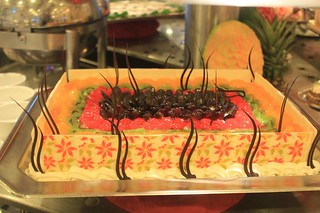 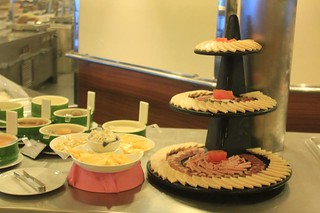 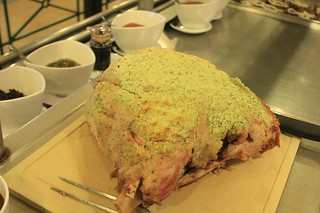 Genting Palace – Served Chinese and Western food. It was a sit down restaurant and the menu was standard. We had a choice if we wanted Chinese or Western food. Both of us had to decide whether we wanted Chinese or Western because the tables are different for either cuisine. For the first few meals we opted for Chinese but I kind of find it few and I was easily hungry after. So after our lunch meal, we would have a second lunch and go up to the Mediterranean buffet. Hehe. Then I started craving for burger… and fries (they didn’t have this in Mediterranean). 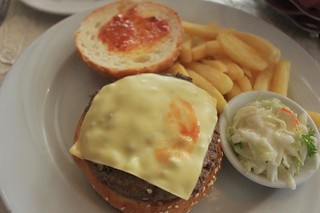 So the next few days I asked Jason for Western please in Genting Palace. When we wanted to talk and relax we dined here. This place was a bit posh so we had to dress up a bit to respect the atmosphere. 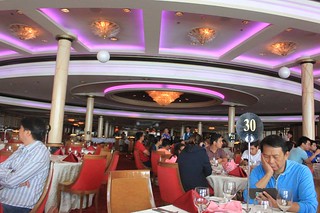 The Pavilion – Served only Chinese food. The menu in Genting and the Pavilion is exactly the same. Went here only once because I wanted the option to choose what meal I prefer.

There was one day that we had Barbecue by the Pool. We enjoyed it as well although the chairs were limited so we had to go to the Mediterranean Buffet to dine. 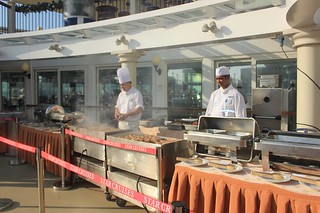 We toured the place and I fell in love with their library. I felt like Belle when she saw the book collection of Beast. They had lots of interesting reads but unfortunately we had little time only. Call me weird but I borrowed a book about a memoir of A Titanic Survivor – as if to scare myself and relive the terror. 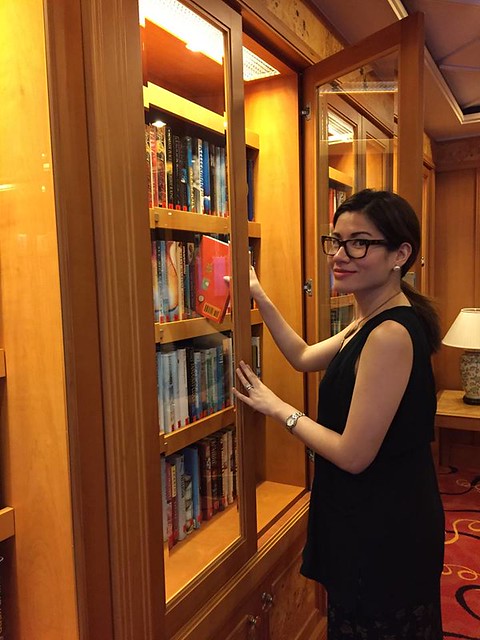 The gym had a gorgeous view of the sea while you are on the treadmill. It was also modern wherein I could choose what virtual trail I wanted to take. Except of course since the ship had movements, I kind of felt dizzy running on the treadmill and felt like like a hamster running on the wheel. I joined a dancing class here and it was fun as well – the dance instructor was very enthusiastic and energetic!

The Parthenon Pool. Well it was kind of hard swimming here because it was 6 ft deep. It had 4 jacuzzis so we spent more time there instead. It also had a huge slide which I tried only once. It was just okay except that I wish their pool was just 4-5ft. But maybe the intent was so that there wouldn’t be much people hanging around this area. There was also a kiddie pool in The Aces Club but we didn’t swim there. 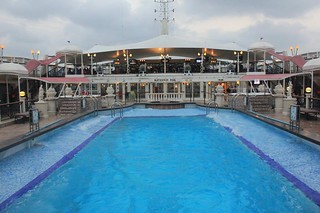 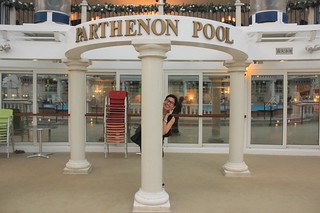 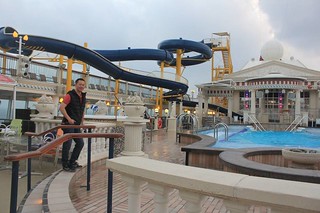 The running track I tried one time and it was such a beautiful experience to be running on the ship. The view was fantastic!

The KTV area we tried once to celebrate the birthday of Toptop. One room had some problems with the KTV so we had to transfer to another room but all is well. 🙂

Duty Free  here was pretty small but we didn’t go here to shop anyway so it was okay.

At around 5PM, we gathered to The Aces Club for a Sail Away Party. There were parlor games and Jason even won in the mini Limbo Rock – How Low Can You Go vs. Cruise Staff challenge. YES. Limbo Rock. He got to take home a medal. 😛 Then we did some dancing! It was so much fun! And then the ship started to sail. 🙂 There were lots of Filipinos in the ship making our trip very easy and homey. 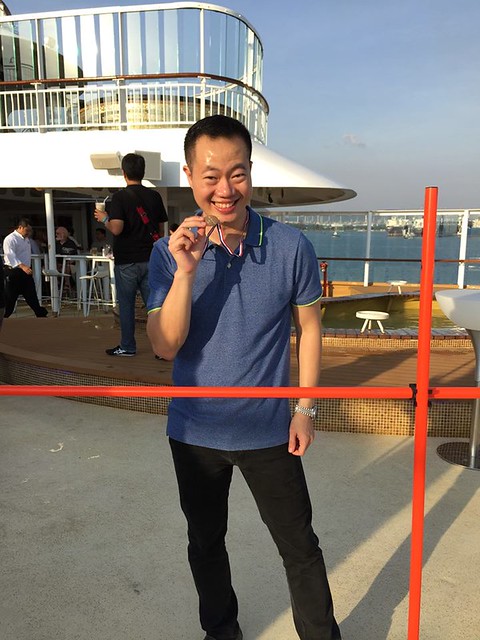 So discussed we did and came to the decision to just remain in the ship for at least Cambodia. Vietnam tour was yet again to be put on the table for discussion.

Later on we found out that the portion of Cambodia on the itinerary wasn’t that exciting – there were limited and unclean toilets and the sights were pretty much ordinary.

So that time I was rebuked and reminded that I listen and defer to my husband’s decision. ;p Then… it turned out that we arrived in Vietnam late around 5PM which was supposedly at 2PM. So really… Jason was right all along. If we pushed through with our Vietnam tour, there was nothing to see and nothing to catch on camera at night.

What I enjoyed about the trip wasn’t only the food but the shows. It was world-class! And since Lido Theatre can only accommodate so much, the seats were closer to the stage and it was like having front seats! I loved the trapeze shows, the dancing and even the comedy and juggling show. It was such a treat every night! We made sure that we always caught the 9PM show except for the Chinese singing show. 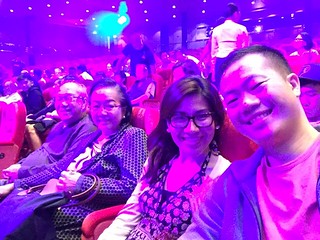 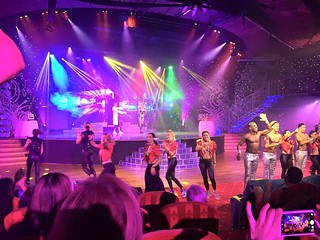 Our Typical Day aboard SuperStar Virgo 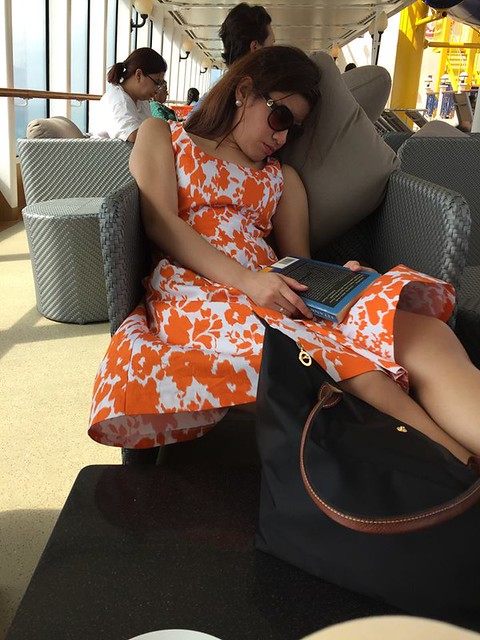 Except of course for the hours when we went against the tide and the ship was rocking like crazy!

At first it felt like a tremor of an earthquake. But of course tremors last only seconds or a few minutes at most right? But this. was. eternal. TREMOR. It felt like forever especially since we didn’t know how long it would take. I was convincing myself that it was just a matter of Mind over Matter. So I just tried as much as I can to adapt to the tremor and took it as if it were rocking me to sleep.

Bonamin really came in handy during the cruise but in case you forget to bring this, Star Cruise Virgo had sea sick pills available and free.

After the cruise, we were still hung over with the waves that even as we were home, we still felt as if the floor was moving beneath us.

I honestly thought it was going to be a formal night. Jason even brought a suit. Hehe. And lugged it around from Manila to Bangkok to the cruise to Hong Kong back to Manila. He he he.

For Captain’s Ball / Night long sleeves for a guy would do and it wasn’t that formal really. Cocktail dresses would suffice for the ladies. They introduced the captain of the ship and the people had the chance to take photos with him. For dinner at Genting Palace, it was a bit more special than the other nights, we had a choice of sea bass or rib eye. We went for rib eye. There was also a mini show of the F&B crew and a parade of the different nationalities represented. 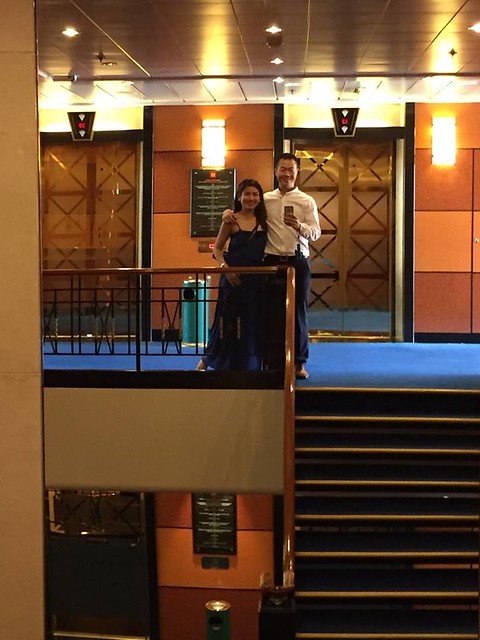 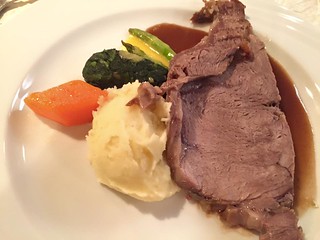 Overall I was so happy with our SuperStar Virgo cruise and especially grateful that we had the chance to have this experience thanks to Jason’s parents. =D We enjoyed every moment of our stay here even the moments when we discussed on why we should or should not avail of the tour. We are thankful to the crew, and the staff who were so friendly, making our stay very pleasant. The food was awesome – it was buffet heaven. The shows were excellent! I thought I wouldn’t be enjoying the shows but I enjoyed every minute of it – eyes wide open.

Praising God for this splendid experience that we get to enjoy each other’s company (it was a blessed moment getting to know my husband in a different place and circumstance), and spend Christmas vacation with the family. 🙂 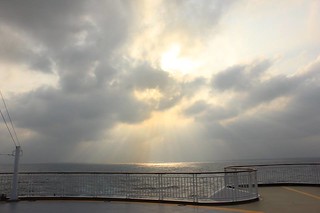