No it’s not Lumpiang Shanghai. But there are other things to try when in this city!

Last December we are thankful that we got to travel to this place. It was around 2 degrees and I just love the cold weather! I love freezing in my toes and walking in the cold! Whenever we travel, we look forward to the food and for some reason the street food. As they say, you can get a feel of the country with the food on the streets.

Shanghai is divided into two by a river called Huangpu. It is divided into Puxi which is old Shanghai and Pudong which is new Shanghai. We stayed at Puxi and almost all tourist sites are within walking distance like The Bund and Nanjing road. The Bund is where we can be awed by the sight of Oriental Pearl Tower in the other side of the river. 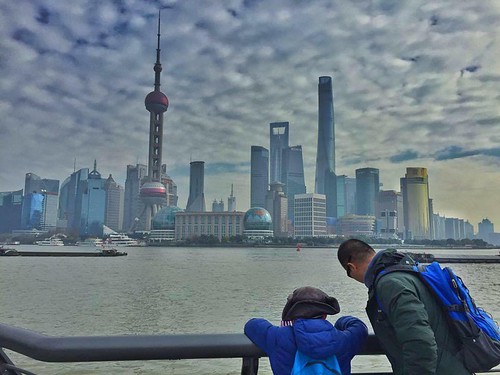 Nanjing road is Shanghai’s shopping district and it was close by. This was where we tried most of the street food. 🙂 yay!

Here’s a list of what we had and you can try when in Shanghai. 🙂

I wish Baguio would have these too in addition to their strawberry flavored taho. 😀

2.  Xiao Long Bao – We saw these Xiao Long Bao’s in a corner in Nanjing Road and we just had to try them after the ravings of Shanghai’s xiao long bao’s. 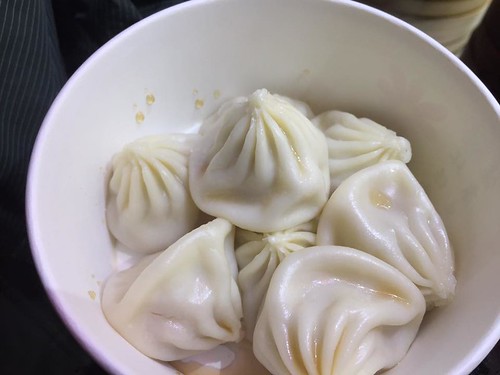 First of all they were huge! There were a lot too around 8 pieces per serving. It’s just kind of uncomfy eating them since we were just standing in the cold weather with this super hot paper bowl even in our gloved hands. And of course for the sauce we just had to slosh it all over the xiao long bao (quickly) since other customers were also in line.

It was perfect for the cold weather since it was really hot. Xiao long bao’s are chinese soup dumplings that as you nibble off the thin skin, flavorful soup would come rushing out of it and you have to be careful as it may scald your tongue or the roof of your mouth!

We didn’t mind! We welcomed the heat to warm us momentarily. It was really yummy and we would have enjoyed it more if we were seated and we had more time to savor the flavorful soup inside the dumplings.

But we were just happy to try this well loved dumpling in the city where it hails from. 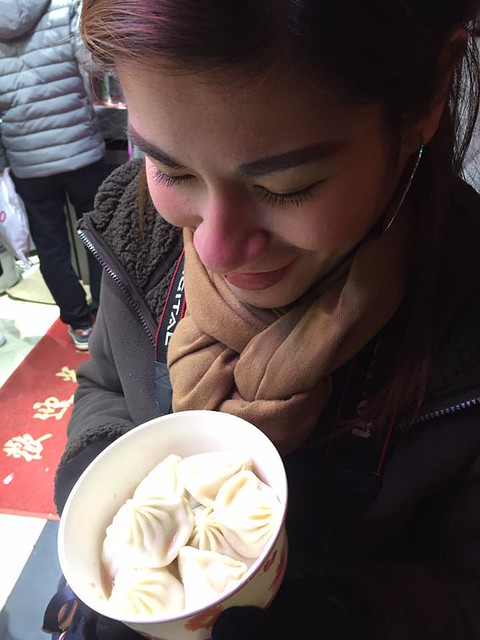 3.  Lamb Kebabs at Kobe Popular Barbecue – A lot of people were lining up for this snack stall so Jason and I gave it a try. Actually he was the one more interested to try this so I just snuck off to get myself a cheese tart (#4). 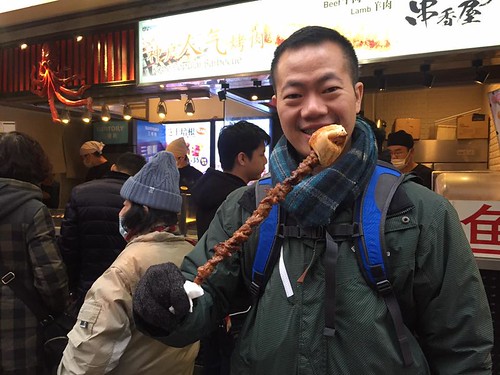 We had a choice of lamb or beef. Jason opted for the former. The meat was tender enough that he didn’t have too much trouble even with braces on. As for me it was just okay since I don’t like cumin so much and this kebab was peppered with this spice. I can smell cumin as I took a bite and it wasn’t that pleasant for me. More for Jason! He enjoyed every bite. 🙂 They say that this meat can help warm us. 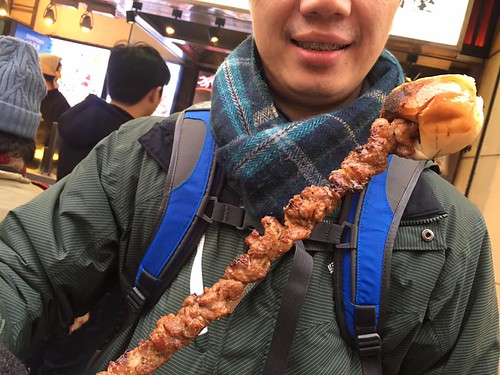 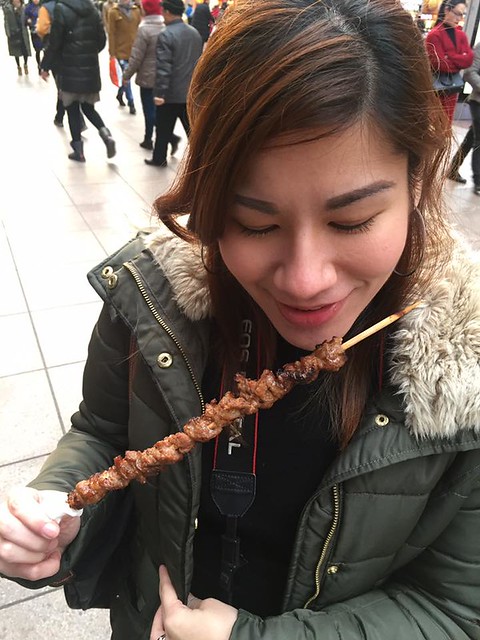 4. Cheese Tart at Cheese Tart – Yes you read it right. It was just right beside the Lamb Kebab stall. Still hung over from Pablo’s cheese tart in Japan, I wanted to give this a try. 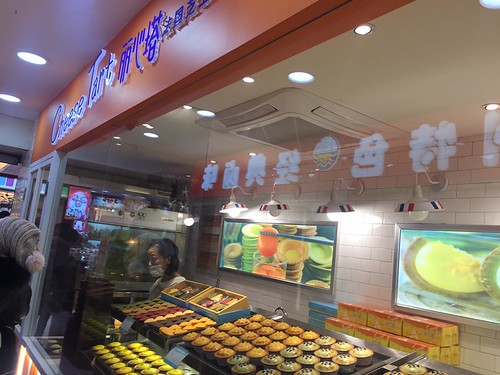 It was pretty much like Pablo’s initially. I got their matcha cheese tart. 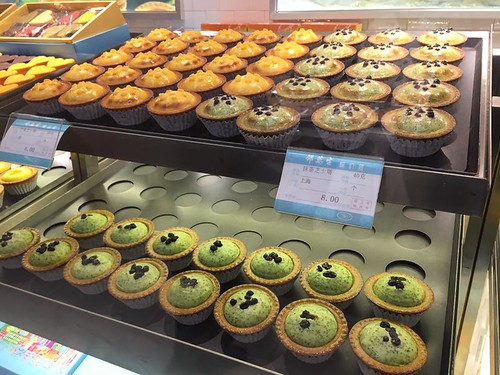 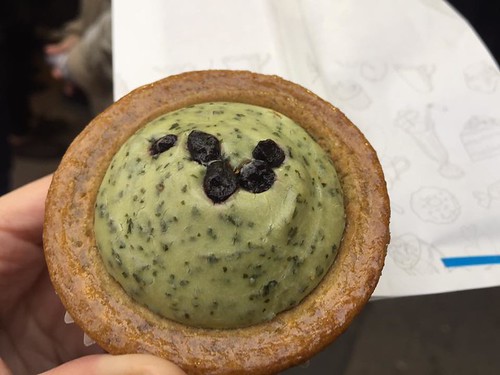 The verdict. Well it wasn’t like Pablo’s obviously. It was creamier and a bit heavier. Jason said it was really different from Pablo’s since the more popular cheese tart chain was lighter and every bite led you to the next. But, to be honest if you just want to have your cheese and matcha fix this is your best bet in Shanghai. 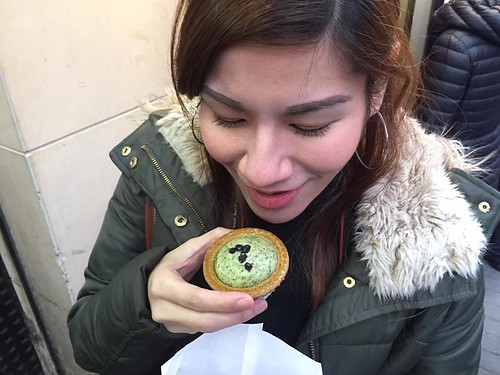 5. Set meals in a restaurant in Beijing road – Sorry I couldn’t remember the name but it was in alley along Beijing road. Anyway. 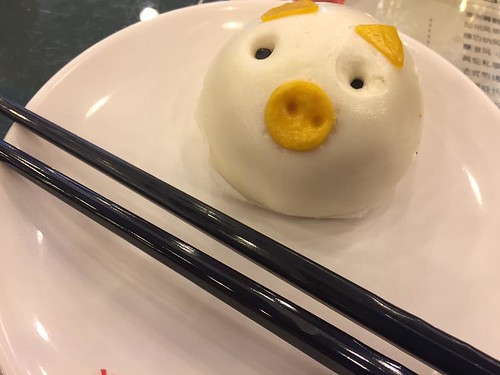 So this little piggy landed on my plate. It was salted egg custard… It wasn’t as soft and fluffy as the best ones as I imagined. Could it be the cold? It was a bit chewy. 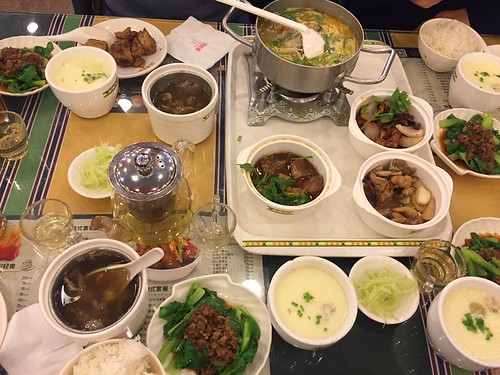 We ordered a set meal and it came with an egg white dish, veggies, rice, a main dish (mine was frog legs) and soup. 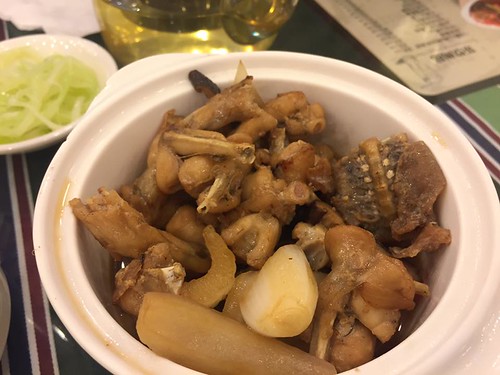 If you are up to try the local dishes which you must of course, there are lots of restaurants in Beijing road that offer these. 🙂

Overall we relatively enjoyed food tripping in this city and trying their street food. This city was tourist friendly compared to the other cities in China, and a lot can understand and converse in English already.

Their street food gave me an impression of tradition that had a lot of foreign influences. Like their cheese tart or their kebabs. There were still a lot of dried fruits or dried meats in their streets but since we couldn’t understand it, we didn’t dare try. There weren’t exotic foods in their streets as what we expected. Their food is familiar and recognizable and there is little chance that you may be eating something you don’t know.

The food was interesting and it was relatively a nice experience. Shanghai is a lovely place to visit, Xin Tian Di we enjoyed most especially because it was europe in asia! The place was very romantic and the alleys took us back to the Barri Gotic in Barcelona. It was easy to navigate this place and because Shanghai is modern and sophisticated China, it makes it very interesting and exciting – truly it is a city that never sleeps.