In the previous post we shared how we went through looking forward to conceiving and yet we found out another more serious thing happening.

Waiting on God: Our Journey to Pregnancy part 1

The recovery was difficult I already felt like I had a cesarean section. So I guess this is how it feels like. Staying at home post operation, I was plagued by negative thoughts that this pain I brought home would be worth it if I had a baby to look after and I would often sulk in self-pity. Looking back and reflecting, I feel like an Israelite. God has just answered our prayer, and here I was. He is about to lead us into the promised land but there are lots of delays because He is purifying our hearts and motives. Jason didn’t mind that we didn’t have a child and he was confident in God that He would bless us one day. But me of little faith..  I was skeptical. He would often assure me that he married me for me and not because of a baby. I would cry and be assured for a while but it would still hurt.

After the operation, we started looking for an infertility specialist. We really preferred our doctor in UST but we considered the distance should our pregnancy push through. According to the OB-gyne’s if we cannot conceive within 1 year of trying, we are considered infertile. The word infertile was so hard to swallow. It was really a blow. I was hoping that by some miracle that year I would get pregnant and prove the doctors wrong. How can we be infertile? I believe we relatively had a healthy lifestyle. I was still in my 20’s, we don’t have any vices and we would sneak in a gym workout or two in a week. Whenever people ask us if there was anything wrong with us, we just say I had an operation, maybe it was it, and we wanted to believe that it was just that and the problem was solved.

A lot, though well intentioned, would offer their theories why and sometimes it would upset me because I feel that we are doing what we can.

We went to an Infertility specialist and she recommended me to take Clomid for about 3 cycles and monitor my follicle every mid-cycle and of course we had to do our part and get busy. We kept track of the days and at times it would get so stressful that we would get irritated at one another. And at the end of the day it defeats our purpose.

I remember Jason would tell me, “If ganito lang, huwag na lang”.

In his mind the baby should be born out of our desire and love for one another that naturally we would conceive because we were filled with love – not spite or any other reason for that matter. I was taken aback but realized it was true. When I dug deep, I was so filled with pride and control issues that God was breaking me.

As for the test results, it turned out that I had a dominant follicle meaning I was ovulating and ready to conceive. But we still weren’t able to despite the 3 monthly cycles of Clomid’s and the “schedulings”.  I got tired of putting my life on hold. I felt that I was prepared (but this was just my feeling), but God wanted us to wait on Him. He was also dealing with me, with my insecurities, my feelings to please people, to give in to the pressure around me, and just for me to be joyful in Him whatever the circumstance may be.

During those times I noticed that I had some abnormality with my period that I would often have one mid-cyle. I was required to do another procedure.

I underwent SISH where saline is infused in the uterus. We found out that I had multiple endometrial polyps. We consulted another OB (and we’re staying with her until now!) who is also an endocrinologist to check if I had any thyroid problems / any hormonal imbalance. According to her, this would be an obstacle for the sperms to reach its final destination 😛 Looking back I saw that my past ultrasounds indicated that I do have polyps but it was overlooked since the cyst posed a much bigger problem. 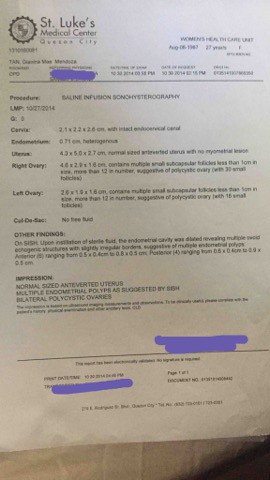 I had to undergo another operation but this time it was minor. It was similar to a D&C. I told Jason I want to write about this, but he told me then to preserve these moments and in time I would be able to tell this story. We took some time off and then proceeded the following year.

Because of the 2014 operation, this one didn’t seem so scary. It was still very fresh in our memories. I am very thankful to my mom who was with us to help with all our paperworks because truly we would be at a loss.

We checked in during the afternoon and I was happy to see my doctor friends who were at St. Lukes that time. Nakapagchika pa kami. 🙂 Thank you for dropping by. 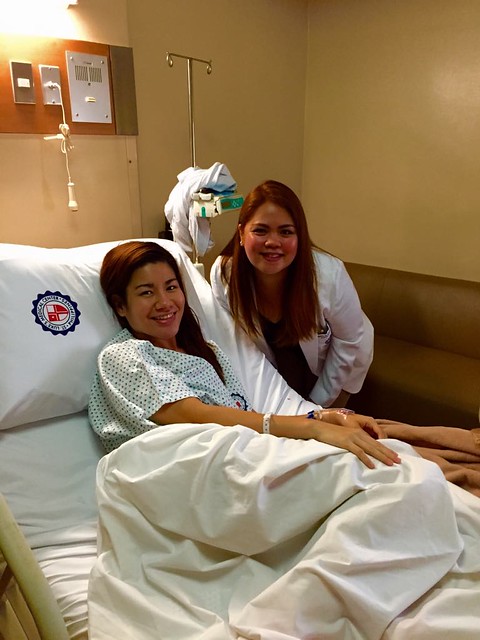 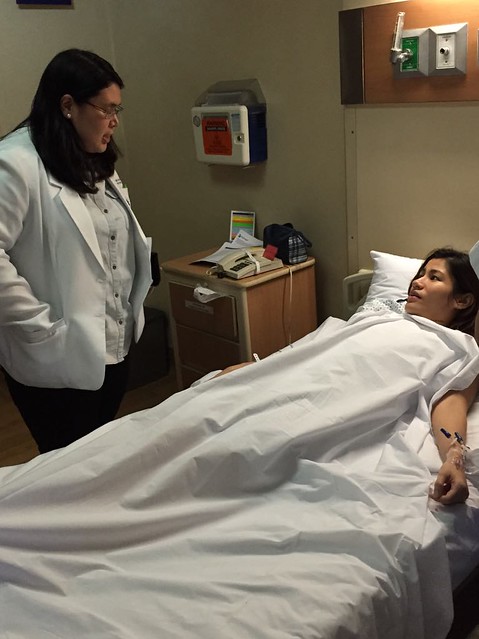 Even if I went under the knife and became a certified “operada”, I was still afraid of the needle! I even told the nurse, dahan-dahan lang po ah takot ako sa needle. 😛 He went there for the IV. 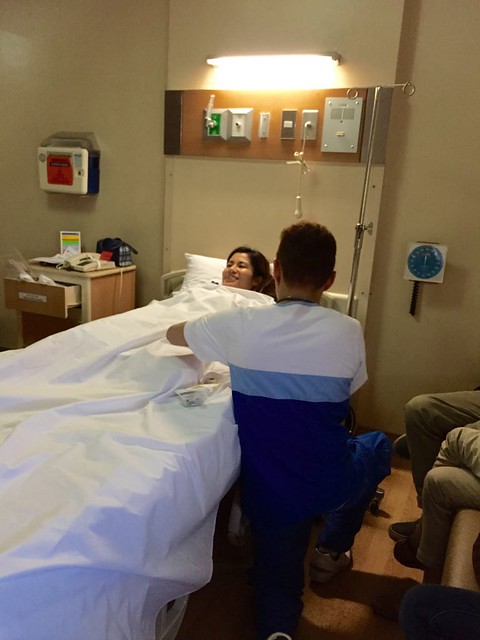 After which, we passed some time and listened to some music. Chill lang… to relax us for what was to come. 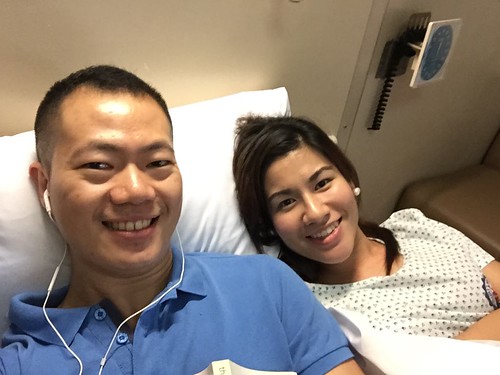 Later on, our anesthesiologist dropped by to brief me about the anesthesia. That it would just be a light dosage and I would easily snap out of it with a nudge or when they say my name, say my name.. She was so funny it calmed my nerves. To be honest I was looking forward to the anesthesia haha – it would be my second time. She told us that she would be meeting us at around 6PM to administer the dose and Dra. Jing would follow.

Around 5:30 PM I was wheeled out of our room and into the operating room. The preps were done once again and I couldn’t care less.. Ganun talaga privacy no more. 😛 As I remember nagchichikahan pa kami ni Dra. as she administered the anesthesia. Ang dami ko pa gusto ikwento and was engaging her in a story but just like that…. I was OUT.

I didn’t know how long it took but I felt Dra. nudge me and I was having the chills in the operating room. I woke up and there were bright lights and I saw that my legs were apart like I was giving birth. A wave of panic sunk in and thoughts were racing like Oh no, I didn’t know what happened to me but good thing I dozed off again.

I woke up in the private room and all was finally well. We checked out the next day and the recovery was very very quick since it was just a minor operation called Endometrial Curettage. I was back on my toes the following day. Good thing too that I had my life insurance and we only paid 36% of the bill net of deductions from Philhealth and SSS.

I was again filled with hope that maybe this time it would turn out fine. That time I decided, one day we will have a child and started writing to him / her. Since 2015 I have written 2 letters to our unborn child and will share in a different entry.

The next step for me was to check my fallopian tubes for blockage but after the operations…. Wait lang. We had to consider our budget too and of course undergoing another painful and probe-ful procedure. We decided that I would just do it the following year.

As we went back to our OB, Dra. gave us the option for IUI and IVF but we weren’t ready for that. Our doctor would ask “Naiinip na ba kayo?” In my mind I screamed YES. But I blurted out, we can wait. engk. But seriously I was getting a bit impatient. Is this the millenial in me? I’m glad that God was working in me showing me that it is not about what we want but what He wills.

The next step was to check Jason’s situation. With his permission, I am writing this. After the sperm analysis test, It turns out that he had less than 4% normal sperms. According to some standard, it takes minimum of 4% normal sperm to conceive a child. His was around 2 or 3%. After a few months it went down to 1%. He was diagnosed to have Bilateral Varicocele.

Next we had to do this test to see if my fallopian tubes were blocked. It was a bit expensive so we opted for a nearby one but it still was a maternity hospital. IT WAS SO PAINFUL. I was wide awake the whole time. When I asked other wives who’ve undergone this, they were asleep.. But I was awake and I was only given paracetamol. Aray.

Praise God after that very painful episode, the diagnosis was my tubes were good to go.

It was recommended that Jason would undergo surgery to cure the varicocele. We just need to eliminate all possible causes and problems. It may improve his normal sperms but still it was no guarantee. Some even without surgery were able to conceive considering their predicament. With all the results that came out, our OB diagnosed us we may be one of the cases that are “unexplainable.” Whut? Sounds like some kind of mystery file. I wanted to be aggressive and maybe check the compatibility of our bloods and APAS etc. but our OB does not recommend it because I was not qualified to have one.

Our problem was we could not conceive. Despite my operations, our scheduling, our Clomid, lifestyle changes.

I’m taking light of it now but back then I read this article about infertility and how I would cry and feel helpless and just long for a child to take up that empty space in our empty room. But what can we do? We talked about adopting and we considered it than have IUI.

We ended the year still with the question left if we should push through with Jason’s surgery.. I think it was sometime towards the end of the year that an opportunity opened for us to serve in the Kids church.

We decided, we will serve Him while we’re waiting. We were just praying for 1 child but how God answers, we would be getting a lot … in Kids church!

But will this be it?