UPDATED as of March 2, 2017 *Thanks to the comment of a guest, the new Spanish visa can be applied thru Philippines BLS Spain: https://ph.blsspainvisa.com/ and NOT thru VFS anymore.

It was in 2011 that I first applied for a Spanish visa for the World Youth Day (WYD) held in Madrid.  During that time the process was a bit different since the church organizers applied for us delegates. It was also different since I was single and employed then. There wasn’t any appearance and we weren’t required to have our fingerprints scanned. It was pretty much smooth and easy. We just submitted documents and later on, voila! A Spanish visa.

Because of the WYD experience, it was my husband’s dream and mine to travel and visit Spain and reunite with my foster family. Last year December 2014, I have been receiving emails of discounted airfare, around 33% discount. We also received news early this year that my foster mom will be having a baby! It was so exciting!! 🙂 Since the airfare was discounted, the value of euro is low compared to before, my papi Cefe and mami Juani are having a baby, though visiting Spain is a long term goal, we decided, maybe 2015 is the year.

We prayed about it but then between January and May 2015, the airfare went back to its original price which was too heavy for both of us. I was asking God and praying to Him for His will that if it is His will, the airfare will be more affordable and go back to its discounted price. We waited and God answered. Last June 2015, the airfare was discounted and back to the 33% discount! We instantly booked it by faith. By faith because the tickets cannot be refunded since it was a promo fare, and we didn’t have a visa yet! The visa must be applied 3 months before with no assurance that we will be approved.

They say that applying for Schengen visa is relatively easy compared to US visa but as I have been reading in blogs, some still get denied due to some unspecified reason. And this time I felt that there may be some difficulty since I wasn’t technically employed but I was working as a financial consultant and had my income. I am not technically considered a full time housewife either that my spouse can vouch for and support my trip. Later on and good thing that my husband and I have already adjusted our ITR based on our married status and our respective income.

We checked out the travel fair last July to see if a travel agency can assist us in applying for the visas. But as we asked around, we decided that we can do it on our own. We went to the VFS website which stipulated all the requirements we had to submit. I then booked an appointment in the website for September 3.

Travel Insurance. Prior to the appointment, we had to get a Blue Cross Travel Insurance (one of the accredited insurance by Schengen visa) which is a requirement in the visa application.

I called Blue Cross and they gave us an application form which I had to answer and fill out. I took a photo and sent it back to them. As they received our application form, they gave us a reference number which we will use to pay in their BDO/BPI/Metrobank account. We paid around 36 Euro each = Php 1,848.96 each that time for the Travel Insurance. We had a  bit of a challenge because they said we should receive it in 2-3 days. However it took 4 days! I called Blue Cross on the second and third day to follow up which I found out there were courier delivery problems and we received the Insurance finally on Day 4. It was a good thing that I called because I found out that they archived our insurance policy already due to their delivery problems.

Documents we prepared were the ff.

I prepared one for me and Jason plus one photocopy of each document: 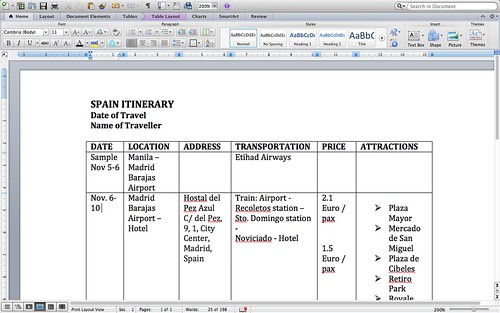 Our schedule was at 7:45AM, we arrived at 6:30AM. There was already a line at that time for those who had an appointment and the walk-ins. The far left was for walk-ins, the 2nd line was for those applying for Spanish visa, the rest I can’t remember but the security guard was the one assigning and fixing the lines.

A few minutes past 7, we were ushered in. We left our phones in the car, but we forgot to bring a pen! Bring a pen, you’ll need it to answer the feedback survey and details of address where the visa will be sent.  At the reception, the officer checked our documents then returned it to us along with a number to bring into the other room. 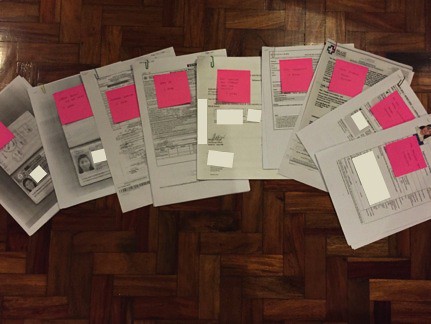 After, I paid the following fees:

We could have saved in the SMS fee because we received an email anyway which is exactly what we received via SMS. The email even arrived earlier than SMS, and the status can be checked in the VFS website. But anyway…

After which, we had our fingerprints scanned. It took me several minutes, Jason thought there was an officer interviewing me! It turned out that the lines in my finger were too light it can’t be read by the scanner.

On that same day, I received an SMS and and email from VFS stating,

Visa application has been dispatched to the Spain Consulate – General, Makati City on September 3 for processing and assessment.

I received an SMS –

Processed visa application has been couriered to you via 2GO. You will receive your passport in 24-48 hours.

I received my passport and stamped on it was the Schengen Visa! 🙂

We arrived early maybe around 7AM and parked in Starbucks, we had to eat there of course. Jason fell in line at around 7:30AM and along with others they had to write their names on a sheet of paper which will determine their line number.

Jason had to wait until 9AM I think and he was asked the ff questions:

How long will he be staying? What was his business? etc.

He returned to Starbucks where I waited at around 10:30AM.

Processed visa application has been couriered to you via 2GO. You will receive your passport in 24-48 hours.

Jason received his passport and the Schengen visa looked back at us as if to say, Hola Espanya!

For us both, the process took around 2 weeks.

I can only thank God that He answered our prayer on discounted flights, visas approved plus everything in between and gave us the opportunity to visit my foster family again! The last time I flew to Spain on my birthday August 8, 2011, I had jitters and I had the stomach flu but I pushed thru. So now we’re praying that we stay healthy and we enjoy our honeymoon and reunion in Spain. Click here for our Spain trip.

*Kindly note that I am not a representative of VFS or BLS and not an employee of the spanish embassy. Please refer to the official websites for the official documents needed. This blog is based on experience only.