This year celebrating special days was spelled B-U-F-F-E-T. We thank God that we were able to try 4 buffets around the metro (on a discount!). Because of that I feel that we already mastered the strategy on how to get our money’s worth, and yet fill our tummies with a lot of room for dessert… and even coffee or tea after. (More on this later)

Below is a ranking of the buffets we tried (not necessarily the best around the metro) and is ranked according to quality of food, service and dining experience.

It is as its name says. While dining we are in fact moving 360 degrees with our view changing ever so slightly. It wasn’t that noticeable and therefore it didn’t give us any motion sickness which my husband would easily detect. 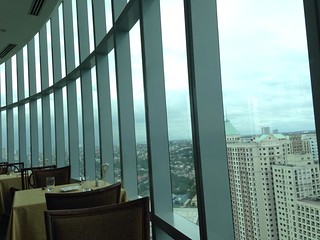 We went there on Valentines Day during lunch time. Dinner was ideal as it was more romantic, but if we were going to eat a lot we decided to go for practical and with ample time to digest. Last year’s Valentine’s we had trouble digesting the set menu of Vieux Chalet during dinner, so I guess we grew wiser this year and scheduled a lunch date. 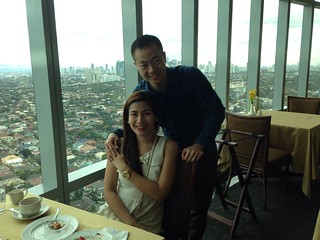 There were only a few customers maybe because we went there at 1PM already. The selection was also limited maybe around 5 dishes + sushi platter +  salad and dessert buffet. Much was said about Chef Jessie’s desserts so I really focused on that (this is me making excuses for my sweet tooth ;p). 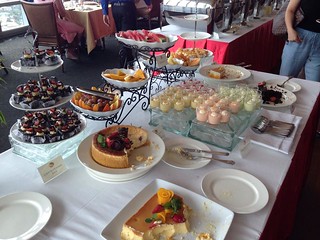 Was it satisfying? Well… it was lovely to the eye and I believe it was the best of the bunch.

The sushi as I remember was just ok as well as the rest of the dishes. I’m not sure if it was because it was buffet-style that the quality of the food wasn’t as fantastic as the view we beheld. 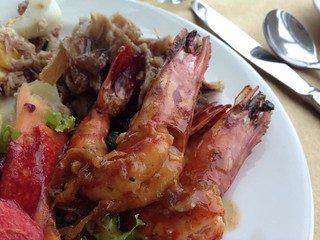 It was a bit confusing since we were “revolving”. There were times that the buffet table would be 3 steps away, and there were times we didn’t know if we should walk to the right or left going towards the buffet. Going back to our seats, Our table number was a good marker or else we would really be going in circles trying to find it.

Experience wise it was just unique to see the city from the top and I would say that once was enough. 🙂

Just this August 2015, we got to try the lunch buffet of 7 Corners in Crowne Plaza to celebrate my birthday and at the same time it was 50% off using Citibank card. The last time we were here was the breakfast after our wedding day.

What I liked most here was the MEAT! and the Bleu Cheese. For some reason I also went back to the Salad Buffet. The lamb was very tender (contrary to what I perceive it to be). 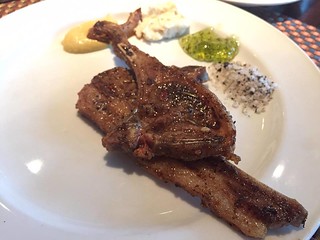 As well as the roast beef carving. I was stuffed. 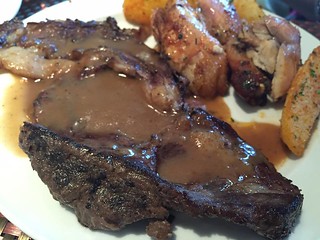 The bleu cheese also had that just right sharp flavor which wasn’t appalling but was very much appetizing. We continued to nibble on it in between dishes. We also had shrimp and baby lobster. 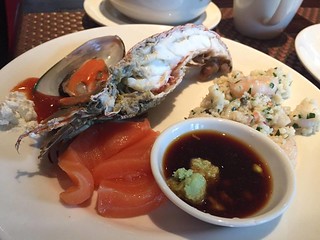 And of course my Japanese food platter (with a bite of century egg). They had a few selection of sushi, so I just stuck with their sashimi. 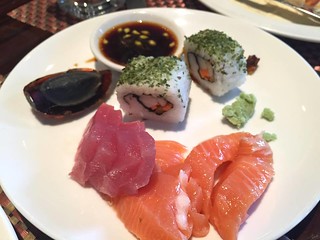 Their dessert had the regular pastries, unlimited ice cream and sorbet. The display wasn’t that appealing so I just had some ice cream. For birthday celebrants they serve their complimentary and luscious a la carte chocolate cake. Thank you. Unlimited coffee and tea was included but for their house blend tea, you had to pay additional 150. 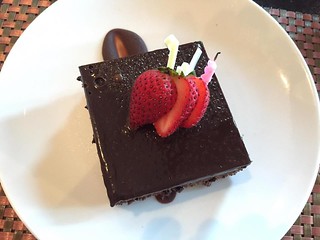 Though the quality of food was fantastic especially their meat section, we found that for a hotel the service wasn’t superb. Our plates piled up on our table, our seats were very close to the entrance so it was very distracting. I’ve read blogs that they usually don’t refill their food so good thing that time they did when the trays turned empty. 7 Corners was a fairly nice experience and their meat section was something to come back to… if it’s on promo.

2. Niu by Vikings at SM Aura

On Jason’s birthday last June we decided to try out Niu since there was a promo for birthday celebrants. :p The age will determine the percent off the regular price. So that time we got 33% off since it was Jason’s 33rd.

The interior was really impressive. The moment we stepped in we felt like we were in a Grand Ballroom. 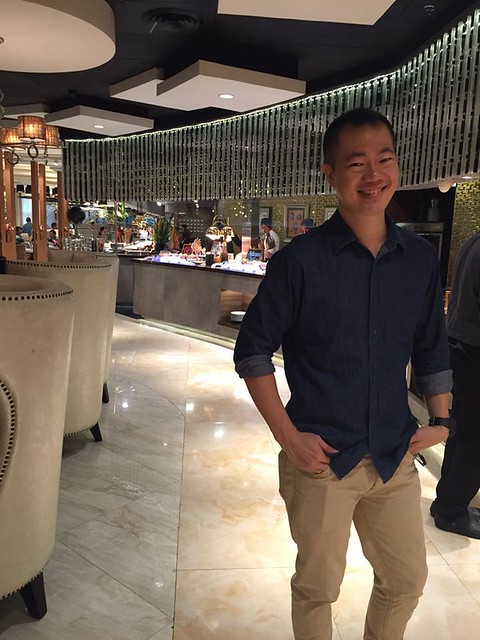 We decided to go for lunch and what was different here compared to Vikings was that they served various wines and special dishes during dinner time. The buffet price was I think maybe 200 pesos more expensive than Vikings (correct me if I’m wrong), but in terms of the food it was I think pretty much the same but with nicer presentations and just a few more. 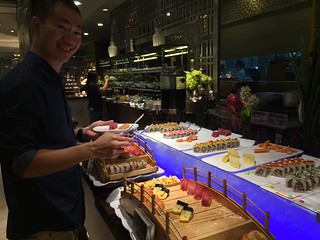 The presentation was overwhelming. From breads, to cold cuts, to sushi and desserts. I personally liked their cold cuts. I stuffed myself with it I kind of lost appetite for the rest. yikes. 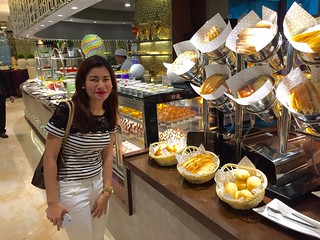 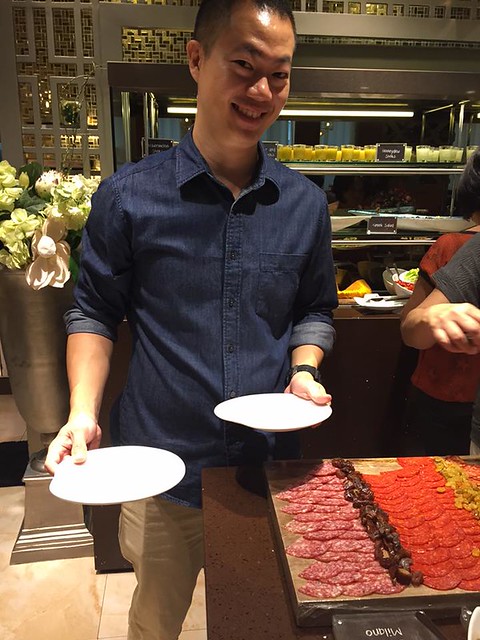 Their roast beef carving looked inviting and at that time we tried it, it already seemed tender and satisfying but when we went to 7 Corners recently, now that was quality roast beef for me. 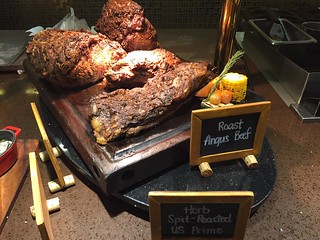 Their dessert had the usual unlimited Ice Cream and sorbet, various pastries, white and milk chocolate fondue and macarons which I liked best. 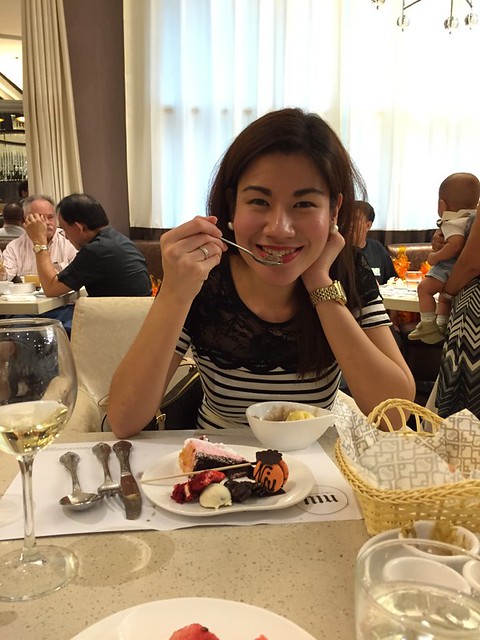 Overall, though the ambience and their offerings were just a tad more upscale – like eat all you can foie gras (during dinner only) and wine for drinks we would settle for Vikings. Not only does it have a fairly sumptuous selection, reasonable buffet price plus the discount for birthday celebrants, but it was also nearby. :p

Quantity or Quality? When we hear buffet we think of copious amounts of food. A spread of varied cuisines that will match our different palates. Many buffets boast of their wide array of food choices but here in Spectrum Buffet I would say they prioritize the taste and quality + quality of hotel restaurant service over quantity.

On our 2nd Anniversary the hubby decided we try out Spectrum Buffet in Makati. Not only was it something new to us (it being in Makati where we don’t usually go), but it was also 50% off at that time! (yay!)

At first when I saw the selection of food it was unusual for me to see a few choices for a usual buffet. But my my, did it turn out to be a surprise.

We first tried their bread, salad, cheese and soup station. We knew that we were in for a treat. 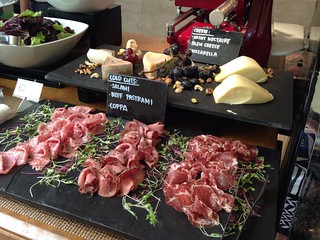 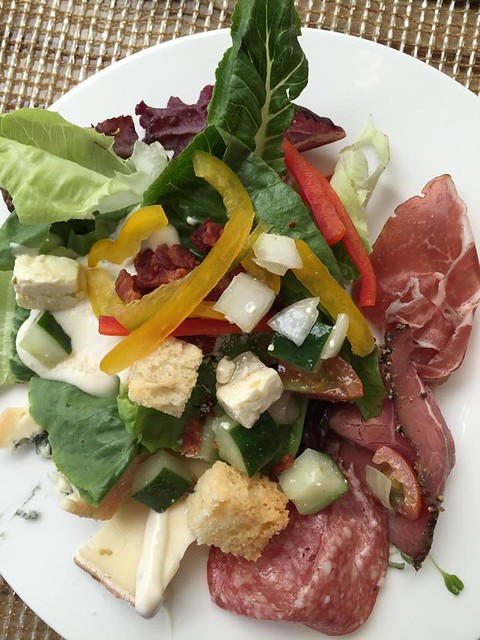 Then we had sushi and sashimi, as well as oysters, scallops and shrimp. 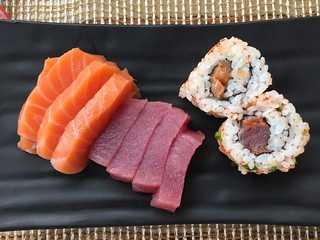 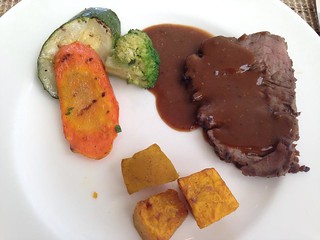 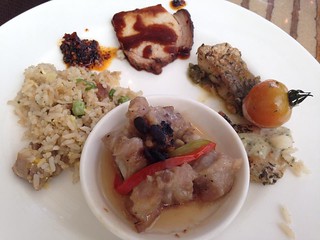 They also had Italian food like pizza and pasta, and they had satays as well. I passed on the pizza and pasta because it was a bit heavy. So I skipped happily to their dessert and they had this chocolate arrangement which I absolutely adored! It was so enticing I felt like that little girl ogling the Gingerbread House. 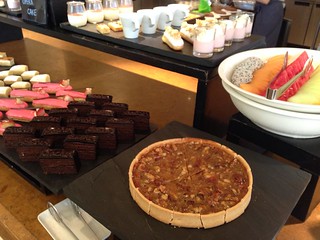 I indulged myself with all sorts of chocolate – dark, milk, and white. It was such a delight! As well as macarons and ice cream. If you haven’t figured it out yet this is my favorite part of the meal. 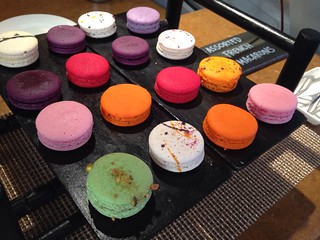 What I liked about Spectrum was the VIP service (even if we were just paying 50%). Every time we stood up to get our food and went back we would find our table napkins neatly folded as if we had just begun, our tables cleared ready for the next course, and the waiters ready to serve us.

They also had a honey station so go get ’em honey! Before I think they used to have live bees creating honey but for safety measure it was now in a convenient dispenser.

It was unlike any buffet I’ve went to. It also wasn’t noisy and it exuded a romantic ambience fit for our anniversary. We were able to talk and enjoy good food from 11am – 2:30pm! Yes we stayed that long because it was so nice to hang out here. This is our undisputed number 1 buffet this year and we are definitely coming back, 50% or not but of course we must have a really good unique reason to celebrate. 🙂

1. Check out all the food first before getting a plate! Sometimes whichever we see first we tend to get more of it. Later on we regret not having enough room in our tummy for the other dishes.

2. Get the pricey ones first! Like the Japanese section, seafood, or carvings. Even if you’ve just had a few and you get full, it is already worth it.

3. Pace yourself! Chew slowly and savor the flavors. Also don’t fill yourselves with juice, stick to water as much as possible (or hot tea) so you can have more room to try the rest of the dishes. 🙂

With that said, Happy Buffet Eating! 🙂 Let me know what you think 🙂