So here’s a rundown of what we ate in Osaka!

Upon arriving in Osaka particularly in Namba station we were famished! Good thing because 551 Horai was just nearby. It was Butaman or similar to siopao here in the Philippines. But the filling was really yum! The filling was so generous and it was so meaty and flavorful. We stuffed ourselves with 2 of each. :)) Greyson loved it so much too because the dough was soft and chewy.

2. Morozoff Custard – This was located along Namba walk. For those who have a sweet tooth, indulge in this! It had sugary syrup at the bottom to compliment the custard on top.

3. Gyu Katsu – in Nara and Namba. We had Gyu-Katsu in Nara after interacting with the deers! :)) It was beef cutlets that was deep-fried. There was a certain way how to eat this and you may watch this in the You Tube version of our food finds.

4. Ice Cream – There are lots at the grocery and convenience stores! Be sure to try one! It was kind of a hit or miss though since I can’t read the labels. I had matcha with red beans. Haha not exactly I flavor I enjoyed. I honestly thought it was matcha and chocolate. :))

5. Kobe Beef – Dotonbori. We had kobe beef at Dotonbori and it was pretty expensive for this piece! I think around 800 YEN or roughly 350 pesos. Grabe diba? Hahah. We told ourselves the next time we go here we wouldn’t scrimp on our food trip. But really this was one of the expensive things to eat here and to be honest I enjoyed our last time better. We had Kobe beef in Kobe. If you really want to try Kobe, please go to Kobe instead! Much more worth it. 🙂

6. Kushi Katsu – in Shinsekai!  If you plan to go to Tennoji Zoo, have lunch in Shinsekai! They are famous for their Kushi-Katsu. We enjoyed the Shrimp here best.

7. Shake Shack in Shinsaibashi – Not really Japanese food but worth a try especially with the long lines here in the Philippines! Grab a bite of these juicy burgers and crisp fries. As you can see, Greyson enjoyed the fries so much! No wonder people are lining up for this in Manila! In Osaka, there were no lines though and the customers were mostly Filipinos :))

We were about to miss going here since we didn’t know if Greyson would permit :)) On our last day, he fell asleep while we were at Namba walk so we decided to go to Kuromon Market. Good thing because it was the highlight of our food trip! Also there was a passage in Namba walk so it was easy to get there by foot.

1. Fresh Oyster and Uni at Nishikawa Fish Store – Around 600 YEN. Super worth it!! We shared this. The Uni was super creamy and it was really fresh! We enjoyed the Oyster with a bit of hot sauce. We would want to have more but we didn’t want to stuff ourselves with this as we wanted to taste as much as we can in Kuromon Market.

2. Fruits in Season – We had persimmon, strawberries and green melon. The persimmon here was really sweet and it wasn’t hard. It was crunchy to the bite. Green melon is also a favorite here so be sure to try one when you drop by! We saved a lot for Greyson since he loves fruits so much. We wanted him to taste as much fruits as we can offer him to enrich his palate.

3. Tuna and Salmon Sashimi Donburi. This stall had the longest line in Kuromon Market and we don’t wonder why! It has the freshest tuna and salmon sashimi. It wasn’t that unique though as we had lots of this in Manila but no doubt here you’ll have the freshest.

4. Torched and Grilled Grab meat and fat. It was so indulgent! But as long as you’re sharing it with someone it lessens the guilt. I couldn’t bear to it one whole shell of this. :))

5. Broiled Crab. Last but not the least! Shred it as if it were noodles and dip it in Crab Fat. Yum!!

Going back here to Osaka was so worth it. There was still so much to do and so much to eat and try. It really is a foodie’s paradise.

Check out our Food trip in Osaka video here. 🙂

Home, Love, Family… and loads of History would describe our experience in this short and sweet trip to Bataan with my relatives from the US (our godparents and my cousin Katrina) and my balikbayan cousin, Ate Len from Dubai. For … Continue reading →

No it’s not Lumpiang Shanghai. But there are other things to try when in this city! Last December we are thankful that we got to travel to this place. It was around 2 degrees and I just love the cold … Continue reading →

Between the two of us, Jason was more excited to visit Japan. But after our 7 day trip I understood why most people love this country. Some enjoy the food, the environment, the weather, the people, and the culture. As one … Continue reading →

For those who would like adventure and relaxation, then this place is for you.

Misibis Bay is a quiet place to stay and since it’s far from the city (around 45 minutes), you’re pretty much confined and limited to what the resort offers. 🙂 Here’s a rundown of what we did at Misibis Bay

We rode the ATV going to the Eco Park and the vehicle was big around 500cc! I was kind of intimidated by it so I chose to back ride instead (well just to be closer to my husband too..ssshhh… ) hehe cheese. Anyway, it was a high quality and highly efficient ATV as compared to the ones we drove and rode before. This was the best we’ve ridden. 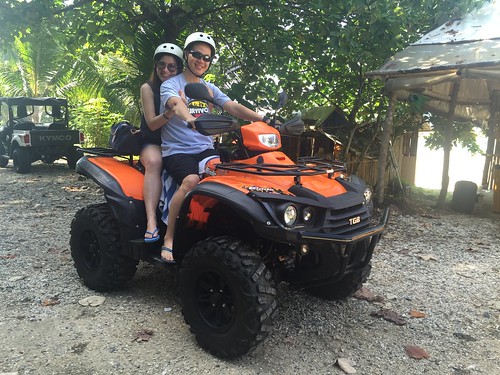 Our first stop was the pit stop of Amazing Race Asia, The Amphitheater. 🙂 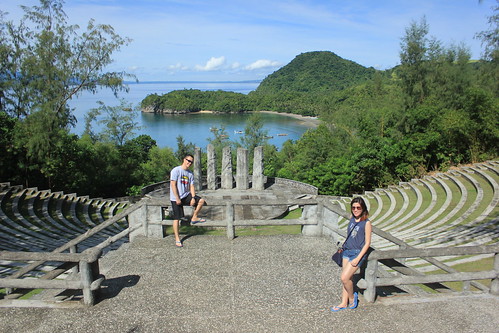 The Amphitheater was a sight to behold. However, there isn’t much to do here but just take photos… 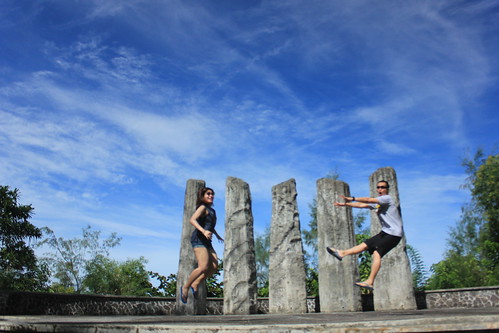 and play around. We had a race on who can run down to the stage the fastest. Jason won. :p But of course…. he had longer strides. :p

2. ATV to the Church

We also visited the church inside Eco Park, where some celebrities wed. We wanted to do a post nup however we weren’t dressed up for it. I guess this will have to do… :p 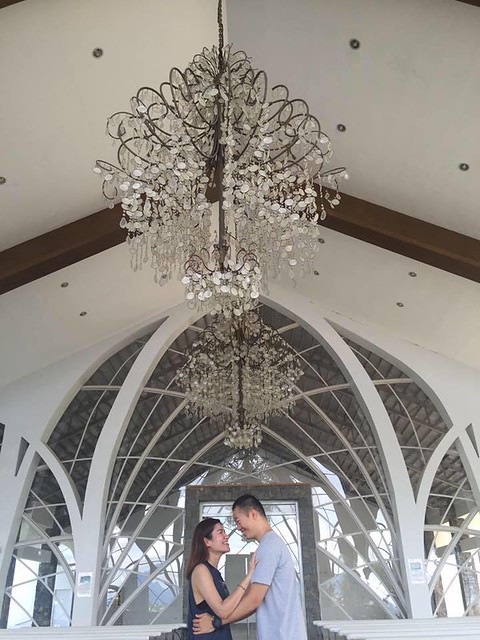 3. ATV to the Hanging Bridge 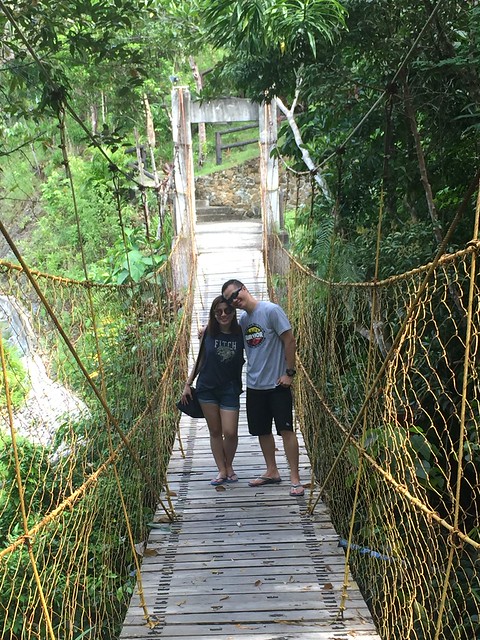 Finally! Some trekking. But the walk was just short. There was a pool in that area but it wasn’t maintained anymore. Also there used to be some activities here like the zip line but due to the storms which would often ruin it, that activity is postponed indefinitely.

This we absolutely enjoyed! Our first Luge experience was in Singapore and it was “bitin” because the road was too short. But here in Misibis Bay we had 700-800 meters. It lasted around 3 minutes. I really took my time so it would be worth it. Hehe. 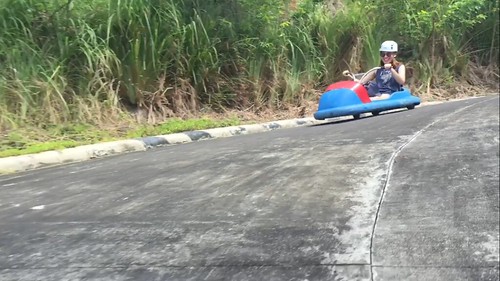 I missed playing! This was so much fun. Adults need to be kids sometimes. 🙂

We first tried this in Boracay some years back. We enjoyed it back then so we wanted to do it again! I only paddled near the shore because I was a bit scared I might fall if I go farther. They lent us life vests though, but still. 🙂 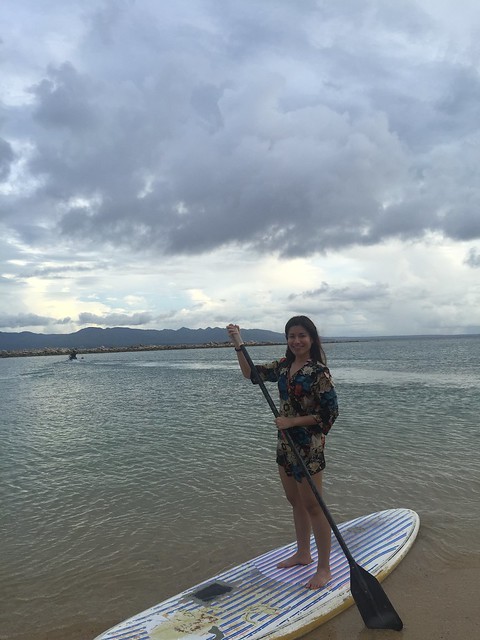 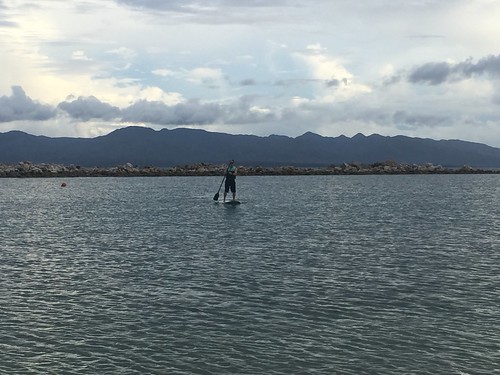 Jason was more daring, He paddle boarded almost near the border… all the way to China. haha.

We also did kayaking and we were supposed to do kite surfing. But apparently kite surfing is only doable if there is wind. Unfortunately during that time there wasn’t any breeze so we just settled with the other water activities.

Of course… Swimming. We had 3 pools to choose from. 1 near the Premier Villa, 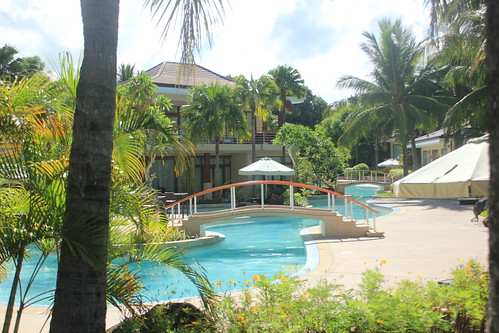 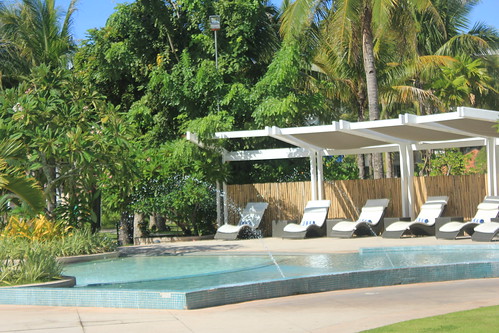 and the other near the Garden View which we discovered on our last day! It had a jacuzzi there. 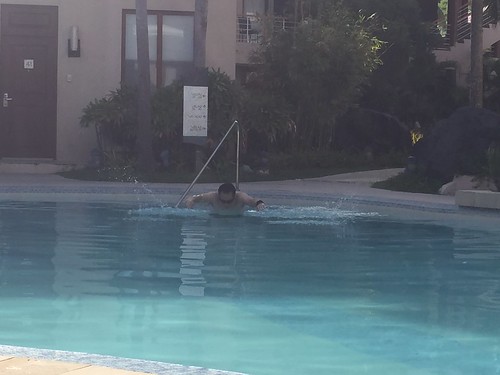 (This pool is near the Premier Villa)

Since the resort was pretty private, we had the pool to ourselves and we swam all we can. It wasn’t deep as well, I think around 4 feet. It was the ideal pool for me! and for kids. :p

So these were the activities in Misibis Bay. I am somewhat adventurous and somewhat steady or laid back so this suited us – we had moments of adventure and moments to unwind.

If you’re out for an adventure it would be best to try other activities like go to Donsol and go whale shark watching, or ride an ATV going to the Mayon Volcano.. (which I think isn’t advisable at the moment, as of October 2016). In any case we enjoyed the trip, it was a vacation and an anniversary well spent but it would be a 7 on a scale of 10. 🙂

We visited Misibis Bay last June and the experience was pretty much okay. 🙂 It wasn’t as fantastic as I’d imagined it to be but it was still worth going to if you prefer a peaceful and a private place … Continue reading →

For our late anniversary celebration, my husband and I decided to go to my grandfather’s hometown in Legazpi Albay. We were so happy that Misibis Bay had a promo! We’ve wanted to visit Misibis Bay but we wanted to wait … Continue reading →